While many people are suffering the post-Christmas January blues, marmalade makers are eagerly looking forward to the arrival of the first Seville oranges of the season and we are no exception. These beautifully bitter oranges are no good for eating or juicing, but they make the best marmalade in the world.

So no sooner had the decorations been packed away for another year than we were dusting off the maslin pans, sharpening the knives and preparing for the short Seville marmalade making season. Our friendly local greengrocer was able to bring us a few Kilos of these precious fruit – well I say a few Kilos, better make that 80Kg – ready for Mr Jam Packed to start preparing.

Marmalade making is always a team effort for us – I do the juicing and scraping and Mr Jam Packed hand cuts all the peel. I know it is possible to make marmalade in a pressure cooker and this may well be quicker and easier, but the final result doesn’t look nearly as good. There is nothing finer than a jar of evenly cut shreds suspended beautifully in a jewel-bright orange jelly – it’s making me hungry just writing this!

Making this preserve really is a labour of love and every batch of 14-16 jars takes about two and a half hours to make. First the fruit has to be scrubbed and prepared, then a large quantity of water is added and the fruit simmered for an hour and a half until the peel has softened and the liquid reduced by about half. The muslin bag containing all this pips, pith and pectin is then removed and squeezed before the sugar is added and the marmalade boiled rapidly until setting point is reached. Et voila! Nothing better in the world to have on toast for breakfast – I only hope we have made enough to last the year. 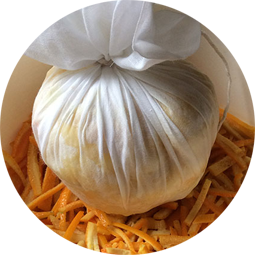 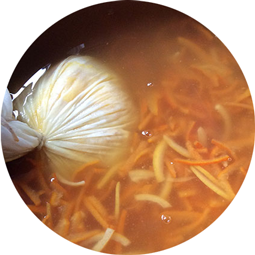 2. Add water and simmer until reduced by half 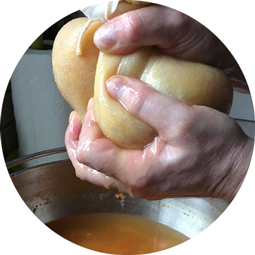 3. Squeeze the muslin bag to remove all the pectin 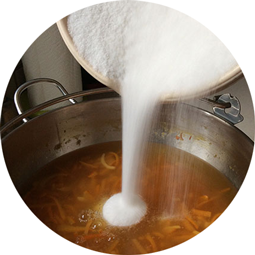 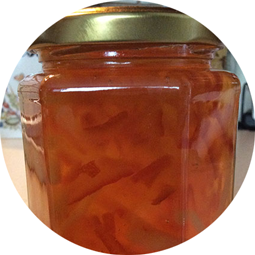