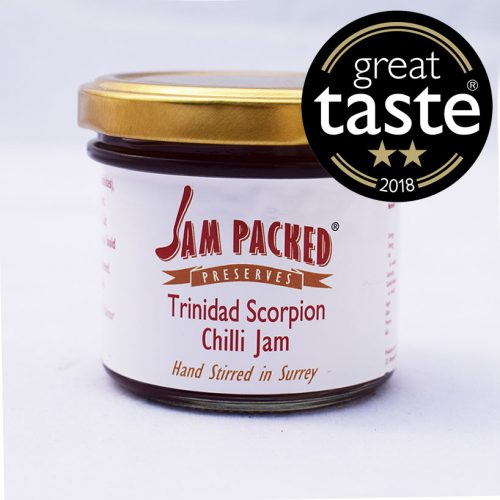 Chilli jam is a savoury jam, so is used to accompany savoury dishes. Our award winning Trinidad Scorpion chilli jam is made using Trinidad Scorpion (or Ghost chillies) and we also make other hot versions with Naga and Carolina Reaper Chillies for those who like even more heat! The Scorpion chilli has a sting in the tail. This is a versatile preserve that can accompany cheese, cold meats, fish or burgers equally well. Alternatively add a spoonful to a stew or stir-fry to spice things up a bit!

The judges said:
Yes this is hot, but not the purposeless blinding heat one might expect from a lesser product. A balanced sweetness and a heat that comes in gently and starts to build into a fiery delight make this sauce stand out above others of its kind. A good set, pleasant fruitiness, this has an intense heat but well balanced. Produced with skill and care. 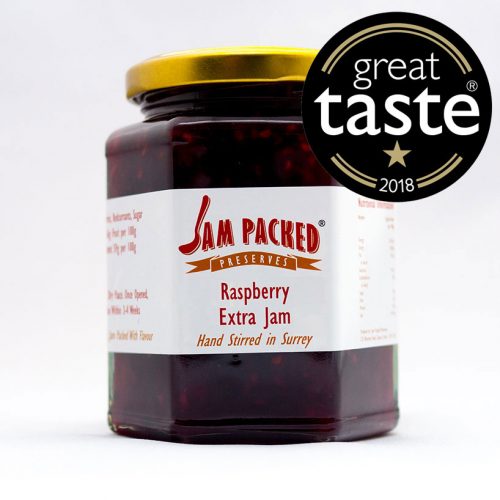 Traditional raspberry jam is a perennial favourite with adults and children alike. It doesn’t get much more traditional than this – I use my grandmother’s recipe, so when people say it tastes just like their Granny used to make it probably does! Raspberries have been grown in the UK for around 400 years and have a wonderful flavour. Raspberry jam is traditionally used as a Victoria sandwich cake filling (without the cream) and is equally good in trifles and in jam tarts.

Our Raspberry Extra Jam won one star in the Great Taste Awards 2018.

The Judges Said:
Very attractive, vibrant colour. Good abundance of fruit seeds, true to the description this is a soft set preserve. A good, complex flavour, some sharp notes balancing out the sweet. A taste of British summer! 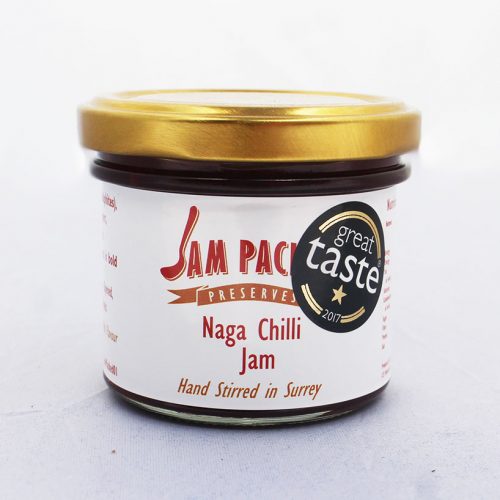 Chilli jam is a savoury jam, so is used to accompany savoury dishes. Our award winning Naga chilli jam is made using Naga (or Ghost chillies: Bhut Jolokia) and we also make hotter versions with Trinidad Scorpion and Carolina Reaper Chillies for those who like even more heat! The Naga chilli has a wonderful sweet flavour and this chilli jam lulls your taste buds into a false sense of security before the full impact of the heat comes through. This is a versatile preserve that can accompany cheese, cold meats, fish or burgers equally well. Alternatively add a spoonful to a stew or stir-fry to spice things up a bit!

The Naga chilli jam won one star in the Great Taste Awards in 2017.

The judges said:
Gorgeous bright colour and good consistency, with visible chilli seeds. Hot on the palate but not bitter. It has a great finish. If you like it hot, you will like this! As the description reads, this is a very, very, very hot Chilli jam. It has a nice set and good colour. This tastes like a sweet chilli jam and then the explosion kicks in. Does what it says on the jar. 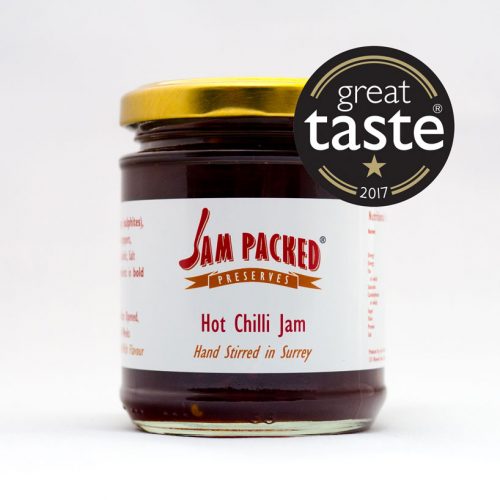 Chilli jam is a savoury jam, so is used to accompany savoury dishes. Our hot chilli jam is made using Scotch Bonnet Chillies, but we also make an award winning milder version with medium red chillies for those who prefer a little less heat. This is a wonderfully versatile preserve that can accompany cheese, cold meats, fish or burgers equally well. Alternatively add a spoonful to a stew or stir-fry to spice things up a bit!

Our Hot Chilli Jam won one star in the Great Taste Awards 2017.

The Judges Said:
This is a punchy chilli sauce, tempered slightly with some sweetness. Judges liked the fact that this sauce carried both heat and flavour. Nice vibrant colour. Heat builds slowly, which works well rather than punching you in the face straight away.

The annual Great Taste Awards run by the Guild of Fine Foods is the pinnacle of food awards, often known as the foodie “Oscars” and attracts 10,000 entries annually from around the world. Only one third of entries will receive one of the coveted 1, 2 or 3 star awards. 141 of the 3 star awards were made this year and 878 foods were awarded 2 stars.

Jam Packed Preserves have received a 2 star award for our grapefruit marmalade, one of only 12 entries in this category to do so with no 3 star awards made this year. This means that our marmalade is one of the top 12 marmalades in the world tasted this year and in the top 10.2% of all the foods entered.

The awards are judged by over 500 of the most demanding palates, belonging to food critics, chefs, cooks, restaurateurs and producers as well as a whole host of food writers and journalists. The panel of judges included; TV chef and author, Valentine Warner, MasterChef judge and restaurant critic, Charles Campion, fifth generation baker, Tom Herbert from Hobbs House Bakery, and Great British Bake Off winner, Frances Quinn; food buyers from Harrods, Selfridges, Fortnum & Mason, Harvey Nichols and Waitrose and chefs including, James Golding, chef director of THE PIG Hotels, and Kevin Gratton, chef director of HIX Restaurants.

We were absolutely thrilled with the award, but even more so with the judges feedback. One table of judges commented:

“A great colour to this marmalade with its hearty chunks of peel. We really enjoyed this breakfast delight with its wake up call of grapefruit zing. Bring on the toast!” Other comments included:“There’s a delicate, appealing aroma to this beautifully shaded marmalade, leading to some lovely bright flavours. The peel is thin and delicate with good texture. Some found it a touch too sweet but others felt the bitterness and zestiness of the peel and of the jelly carried the sweetness well. Clearly we have room to improve to achieve the most coveted 3 star award and the helpful feedback has given us pointers on how to develop this product, but don’t take their word for it – why not try this marmalade for yourself. We would love to have the feedback from you, our customers, as well!

We are delighted to announce that four of our preserves won awards in the Chutney Awards 2015 against competition from as far afield as New Zealand! These awards were judged on taste by a panel of chefs, restauranteurs, food critics and foodies and you can buy all of these products in our shop to taste for yourself.

The award winners are: 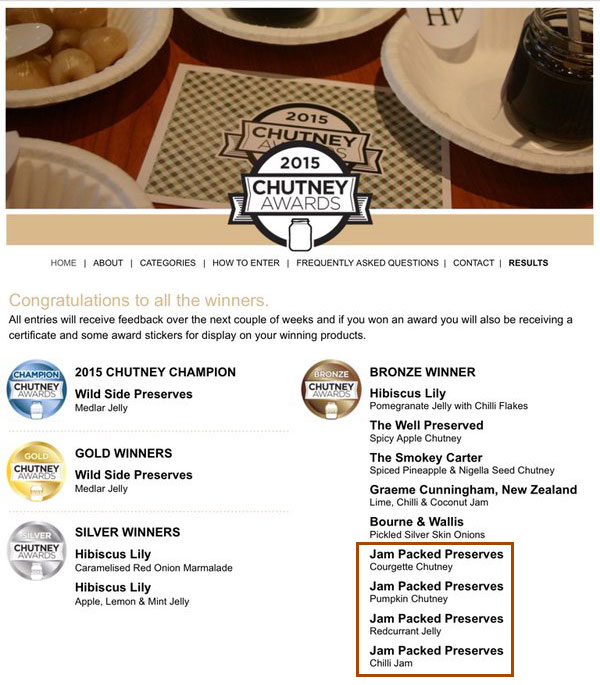